America is becoming a battlefield – Prophetic
by Messengers of Light
January 23, 2012
Current Events

In Jan. 2012, america is quickly becoming a battlefield for religious liberty and the rights of the constitution. A law is being debated that will aid in the total repudiation (throwing away) of the constitution of america and lead to a union of church and state in america. This will bring about the enforcement of the mark of the beast and worldwide persecution see Revelation 13:11-17. 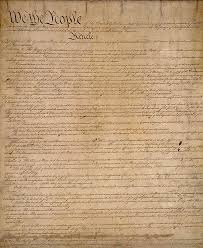 “By the decree enforcing the institution of the papacy in violation of the law of God, our nation will disconnect herself fully from righteousness. When Protestantism shall stretch her hand across the gulf to grasp the hand of the Roman power, when she shall reach over the abyss to clasp hands with spiritualism, when, under the influence of this threefold union, our country shall repudiate every principle of its Constitution as a Protestant and republican government, and shall make provision for the propagation of papal falsehoods and delusions, then we may know that the time has come for the marvelous working of Satan and that the end is near.  {5T 451.1}

Inspiration makes it clear that as we see the constitution ripped to streads that we may know that the end is near! We are nearting that time today in Jan. 2012. Infact inspiration also says that it will be a “battlefield” notice the following inspired quotation:

“A spurious sabbath is presented to be legislated into power, compelling the observance of a sabbath which God has not enjoined upon man. The persecutions of Protestants by Romanism, by which the religion of Jesus Christ was almost annihilated, will be more than rivaled, when  Protestantism and popery are combined. . . .  {3SM 387.1}
” Our own land is to become a battlefield on which is to be carried on the struggle for religious liberty–to worship God according to the dictates of our own conscience. Then can we not discern the work of the enemy in keeping men asleep who ought to be awake, whose influence shall not be neutral, but wholly and entirely on the Lord’s side? Shall men cry, Peace and safety, now, when sudden destruction is coming upon the world, when God’s wrath shall be poured out?– Manuscript 30, 1889.  {3SM 387.2}

Prophecy is being Fulfilled – America is becoming A Battlefield

This is happening right before our very eyes. In the short clip (click here- terrorclip) provided you will see prophecy is being quickly fufilled. Our constitution is being destroyed, our liberties are being taken away. Our only hope is a relationship with Jesus Christ and following His principles of preparation in Bible and Spirit of Prophecy (see John 8:32, 36)!

← Jobless in Iowa: a third of the state’s unemployed have been looking for work for six months or more Sunday's Coming - According to CNN report →