“The badge of Christianity is not an outward sign, not the wearing of a cross or a crown, but it is that which reveals the union of man with God. By the power of His grace manifested in the transformation of character the world is to be convinced that God has sent His Son as its Redeemer. No other influence that can surround the human soul has such power as the influence of an unselfish life. The strongest argument in favor of the gospel is a loving and lovable Christian. {MH 470.1}

The Discipline of Trial – (How Can Christ Develop me into such a Christian? see below)

“To live such a life, to exert such an influence, costs at every step effort, self-sacrifice, discipline. It is becau

se they do not understand this that many are so easily discouraged in the Christian life. Many who sincerely consecrate their lives to God’s service are surprised and disappointed to find themselves, as never before, confronted by obstacles and beset by trials and perplexities. They pray for Christlikeness of character, for a fitness for the Lord’s work, and they are placed in circumstances that seem to call forth all the evil of their nature. Faults are revealed of which they did not even suspect the existence. Like Israel of old they question, “If God is leading us, why do all these things come upon us?” {MH 470.2}

“It is because God is leading them that these things come upon them. Trials and obstacles are the Lord’s chosen methods of discipline and His appointed conditions of success. He who reads the hearts of men knows their characters better than they themselves know them. He sees that some have powers and susceptibilities which, rightly directed, might be used in the advancement of His work. In His providence He brings these persons into different positions and varied circumstances that they may discover in their character the defects which have been concealed from their own knowledge. He gives them opportunity to correct these defects and to fit themselves for His service. Often He permits the fires of affliction to assail them that they may be purified. {MH 471.1}

“The fact that we are called upon to endure trial shows that the Lord Jesus sees in us something precious which He desires to develop. If He saw in us nothing whereby He might glorify His name, He would not spend time in refining us. He does not cast worthless stones into His furnace. It is valuable ore that He refines. The blacksmith puts the iron and steel into the fire that he may know what manner of metal they are. The Lord allows His chosen ones to be placed in the furnace of affliction to prove what temper they are of and whether they can be fashioned for His work. {MH 471.2}

“The potter takes the clay and molds it according to his will. He kneads it and works it. He tears it apart and presses it together. He wets it and

then dries it. He lets it lie for a while without touching it. When it is perfectly pliable, he continues the work of making of it a vessel. He forms it into shape and on the wheel trims and polishes it. He dries it in the sun and bakes it in the oven. Thus it becomes a vessel fit for use. So the great Master Worker desires to mold and fashion us. And as the clay is in the hands of the potter, so are we to be in His hands. We are not to try to do the work of the potter. Our part is to yield ourselves to be molded by the Master Worker. {MH 471.3} 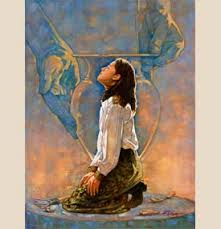 “Beloved, think it not strange concerning the fiery trial which is to try you, as though some strange thing happened unto you: but rejoice, inasmuch as ye are partakers of Christ’s sufferings; that, when His glory shall be revealed, ye may be glad also with exceeding joy.” 1 Peter 4:12, 13. {MH 472.1}